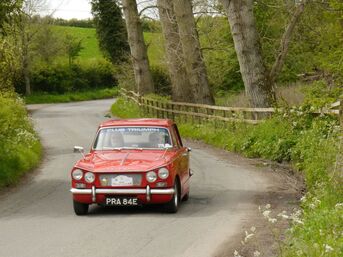 In the morning of Sunday 23rd May some 60 cars gathered at the recreation ground in my home village of Little Horwood for the start of this year's Winslow Classic Run; actually, it was the 2020 event postponed from last July. As always, the event was organised to raise funds for the Rotary Club of Winslow's favoured charities as well as to provide enjoyment for the entrants.
Amongst the cars were my ever-faithful 1967 Vitesse Saloon with my wife, Mary, on hand to give me directions. The oldest car entered was a 1925 Humber 12125 Tourer and it was good to see a total of twelve Triumphs on the entry list - a selection of TRs, Stags and another Vitesse.
Having signed on and collected our roadbook we had time, whilst consuming bacon baps and coffee, to chat with friends and have a look round at some of the other cars before setting off shortly before 10.00 am to follow the route which comprised some ninety miles of mainly minor roads through north Bucks, south Northants and north Beds leading to the finish at Milton Keynes Museum, admission to which was included in the entry fee.
With the number of road closures caused by construction of both HS2 and East-West Rail in much of this area, it was no mean feat for the organisers to have succeeded in providing such an interesting route!
Heading generally west we followed some minor roads passing south of Buckingham before entering Northants as we headed north towards Whittlebury, then across the A5 just south of Towcester. Some navigators (no names mentioned!) made a wrong slot in this area but we soon got back or route, albeit in a rather slow-moving car convoy. To get out this situation, we made a stop to use the facilities at the Salcey Forest Visitor Centre.
The next fifteen miles or so took us through an area of Northants with which I was not familiar, however, some of the villages' delightful names such as Quinton, Preston Deanery, Whiston, Castle Ashby and Easton Maudit seem to invite further investigation, particularly those where the older properties are constructed with the attractive local limestone.
After crossing the county boundary into Beds, and again briefly back into Northants, we reached the most northerly point of the route. There we turned onto the A6 just south of Rushden to enjoy a 3½ mile blast broken only by a stop for petrol, until turning right for Sharnbrook. We then passed through Odell, Harrold and Carlton before reaching Valley View Farm where the organisers had made arrangements for entrants to visit. 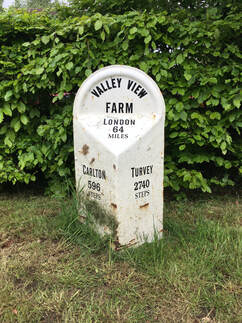 ​This farm’s owners specialise in hand rearing lambs for their lactose free milk which is used for various cheeses, ice cream and yoghurt which are produced on site. With the number of lambs being some 2 to 300 an interesting "side-line" arose: what does one do with the whey left over from the cheese production? The answer was to invest in a few little pigs who are only too pleased to consume as much as they can!
Having purchased some cheese to take home, we had whetted our appetites, so, just down the road we stopped at The Three Cranes in Turvey where, despite not having pre-booked, we were welcomed inside, shown to a table and enjoyed an excellent snack lunch whilst a heavy rainstorm passed outside. Fully refreshed, we crossed the A428 as we left Turvey and continued southwards. Next, having re-entered Bucks, we crossed the A422 at Astwood, skirted around Cranfield, through North Crawley then crossed the A509 at the roundabout at the northern end of the Newport Pagnell bypass. Without having to enter Newport Pagnell, the next few miles took us along the B526 to the left turn for Haversham and Wolverton. Then the final two miles or so, within Milton Keynes itself was easy to follow to the finish at Milton Keynes Museum where we arrived soon after 2.30 p.m.
The Museum, housed in a former Victorian farmstead, is well worth a visit. As might be expected there are numerous old agricultural implements to see. Other displays include old shops, a Victorian kitchen, communications history and transport. And one must not forget the famous concrete cows contentedly eating the meadow grass in front of the former farmhouse. These are in fact the original ones dating from 1978 made at Stacey Hill Farm, now the Museum, by Canadian artist Liz Leyh. Later replicas were made by Bill Billings, and these can be seen in nearby Bancroft located next to the A422 nearby its junction with the A5.  The Museum is a Trust run largely by volunteers and was most supportive of the event. ln fact the venue had only reopened four days beforehand following the long closure caused by the COVID pandemic. With the event having raised some £3,000, The Rotary Club of Winslow will be making a donation to the museum.
The organisers intend to find another interesting route for 2022 (once again avoiding any major railway works) and have pencilled in Sunday 22nd May – a must in the diary!